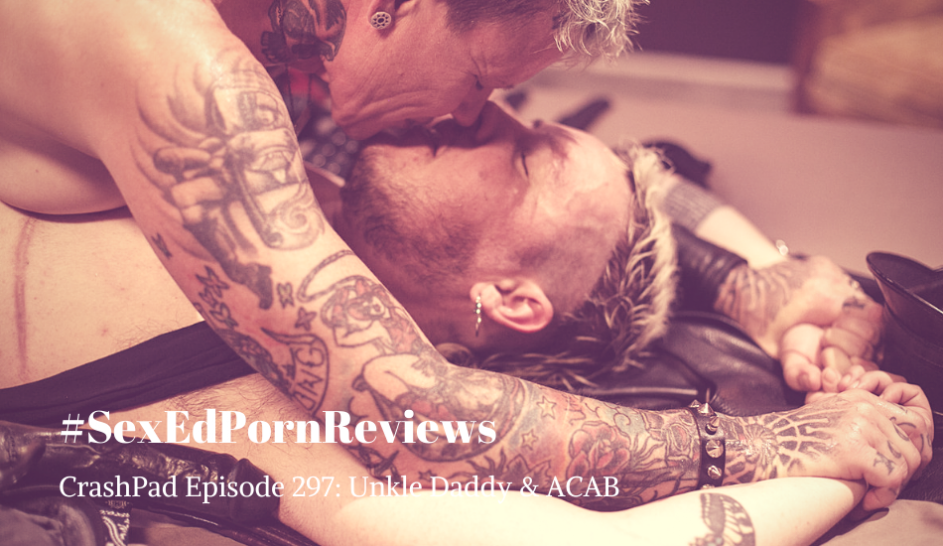 If you know anything about the folks I'm into, Unkle Daddy is a total dreamboat to me. I have always been into bikers, and seeing someone say their turn on is sex on a motorcycle is perf. He truly seems like the perfect person to be able to DIY a sex machine. #SexEdPornReviews pic.twitter.com/gUHsnDTcwA

First, What's not to love about a performer who chooses the name ACAB? Also anyone who is a leather daddy that is invested in smashing the patriarchy, I am going to be swooning. #SexEdPornReviews

"Unkle Daddy needs someone handy to get handsy with, and ACAB's an eager helper…" https://t.co/KhZosgZNEi

Well, this toy is automatic–
It's systematic-
It's HYDROmatic–
Why it's Greased Lightning! https://t.co/PHE88dai7V

He brung the TOOLS https://t.co/iAjSsZSkSY

DIY at home — “Pervertables” can be found in household items

I love seeing creative uses of pervertables. Normal things you have around your house that can be used in kinky ways, like clothes pins! And using a bag as a connection to be able to pull them off in succession is brilliant #SexEdPornReviews pic.twitter.com/bAFUGRwPg6

It's true with any type of clamp, the longer it's on the more it hurts to come off, so a good way to play around is to start slow and not leave them on for too long. #SexEdPornReviews

Those C47's sure come in handy!

"I love seeing creative uses of pervertables. Normal things you have around your house that can be used in kinky ways, like clothes pins!" ~ @Makeupandsin reviews the latest CrashPad episode #Pervertables #SexEdPornReviewshttps://t.co/KxXVQYoRaW

Being ready with an underwear style harness and pack and play means getting to the fun stuff as quickly as possible. ACAB is ready to go. If you want more tips on BJs on Aftermarket cocks, check it out! #SexEdPornReviews https://t.co/l9lj8vW3E7

Favorite part was probably when Unkle Daddy checked in with ACAB before going down on him. #intimatemoments #kink#transrepresentation #beyondbinary#SexEdPornReviews

“If we want smut that makes room for trans bodies, then trans hands have to write it, direct it, perform in it, and produce it.” ~ @acvalens

Or a handheld, less expensive version from @SheVibe here#SexEdPornReviewshttps://t.co/WtRvSeZGyI

The Reviews are Out!

What an amazing Episode! See all my thoughts of @CrashPadSeries episode 297 here #SexEdPornReviewshttps://t.co/xyKn7LLwXy

Thanks for the Love!

What’s up with your Venus, what happens in couples’ therapy, what to wear to break up with your partner and more! https://t.co/9rgE10a2ST

Thank you Unkle and ACAB, and thank you sexual health educators and sex bloggers for watching. Want to see for yourself? Watch here!