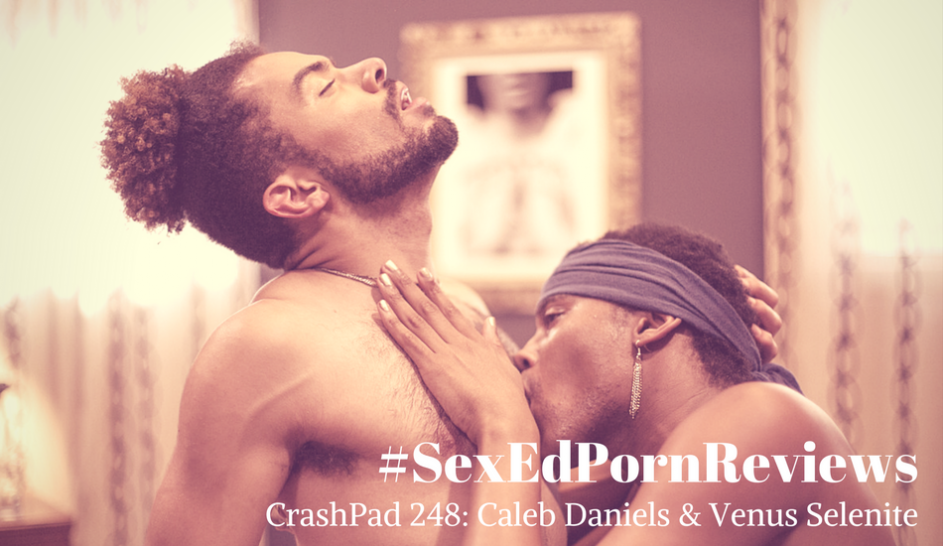 I love the way these two kissed and seemed to introduce their bodies to each other. Full trust.

minimal talking n this scene makes it feel real af like that sex you have right after a night out n you're both n luvvv ? #sexedpornreviews pic.twitter.com/jCl9qczBfl

SO n my feelings ovr here bc this a lil what my luv looks like 2: a mix of blk joy deep focus n full xpression. thx yall ♡ #sexedpornreviews

Sex outside the binary

We have a few scenes on CrashPad that do not feature penetration. Since performers get to choose what they do, what counts as sex varies!

Feel it, Feel it

Caleb was great with the wand. We did hot stuff for @CrashPadSeries. Here: https://t.co/CiGhIEJq2w pic.twitter.com/NU7qeAZy6r

First, I've always stressed this…I love how this shows that vibrational pleasure is NOT just for vaginas! pic.twitter.com/AXsVgAo9fJ

So any and all folks, share your vibe (literally) with your partners. It's for all of you. ??

Plus the episode feature one of my favorite uses of the Magic Wand. #SexEdPornReviews

Yes!!!! The wand is a wonderful toy. I believe it was my idea for use in the scene. So much pleasure. Such a versatile object!

Zazu Nova called herself the Queen of Sex. I intentionally and organically channeled her to create this @CrashPadSeries episode. pic.twitter.com/yy4IaOFN8R

"its ok, that does not happen! we can always do something else!" ~ @venusselenite on checking off acts on the "stuff to do during sex" list

One question: does @PinkWhite or @CrashPadSeries have some kind of lube hook-up? So much lube! (More lube is better though) #SexEdPornReview

We DO! Thank you @GoodVibesToys for being our Safer Sex Sponsor and hooking us up with the best lubricant! #thingswelike #SexEdPornReviews https://t.co/eeT1kNBv5S

Still Holding Each Other

Our next filming is Saturday, November 4th. Watch @ShineLouise and her crew film CrashPad in real time! #CrashWithUs https://t.co/BoXectZj0K

This week we got a mention in TEEN VOGUE!

TEEN VOGUE might be our proudest press mention yet! ? https://t.co/J3Y8o6RHJe

Performers have the last words

I'm about to watch my @CrashPadSeries scene for the first time. ? pic.twitter.com/dbxOrPDp3O

Trans femme sex is so liberating.

After the scene, Caleb and I interviewed each other, and I clearly said that I made this scene for trans femmes attracted to trans femmes.

Thank you @QueerLunarQueen for creating a fun and magical episode with me! ? https://t.co/asu830dBRN

Thank you Caleb and Venus! Thanks to our panel of sexual health educators and sex bloggers for watching. What did you think of the episode? (Leave your comments below.) Want to see see for yourself? Watch here!