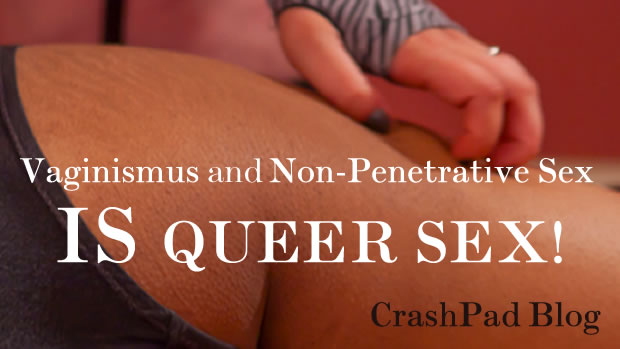 by Creatrix Tiara aka Mendhi Henna

It seems to me that for all the talking about how queer sex is more diverse or varied or open than the mainstream, it still shares a common marker: penetration as end goal.

This echoes more conventional ideas around heterosexual sex , where it doesn’t count as “sex” or “losing your virginity” until there is vaginal penetration (though thankfully this notion is being questioned more and more.

As a queer person who cannot do penetration, for reasons I will detail below, I already find much of mainstream sexual discourse alienating – but the alienation is doubly so in queer circles. I don’t expect mainstream sex (like most of mainstream culture) to represent me at all, but it’s an extra special frustration to feel like a freak in your community. I do not buy into Dworkinesque politics about penetration being oppressive and resent the implication that I am not sex-positive or somehow ‘frigid’ because I find one mode of sexual activity overly represented. Instead I ask that us fellow queer people broaden our thinking on what makes great sex, moving away from specific activities as highlights to building whole experiences.

Penetration didn’t used to be a problem for me; it didn’t really do as much for me as other forms of stimulation, but it was doable. Long before then I got more out of various forms of sexual play; I would rather spend my sexytime smothered in touch or having intensely intimate conversation. Penetration? Meh.

This strongly affected my confidence with romantic and sexual relationships. I am lucky to have a (straight, cis) male partner who has grown to enjoy non-penetrative sex so much that he, like me, prefers it to penetration; however, for a long time I felt like I was holding him back from expressing his full sexual options. The joys of relationship anarchy meant that we didn’t have to be each other’s only sexual partner, and indeed he has found another sexyfriend to explore penetration with as he wishes. In the meantime I too have been relatively lucky to find other sexyfriends and partners that didn’t insist or penetration, but many times it felt like making a concession rather than an exciting opportunity to try something different.

I would hear stories about being wrist-deep in another person, or be amongst friendly group chatter around where to find harnesses for dildos in the city, and feel left out. No one else seemed to as rhapsodic about, say, being eaten out the whole night (and have it end there) or not being touched at all and instead having a purely mental orgasmic experience. The closest thing I could find to my experience was the idea of being a “stone”, which really did not describe me. I am often a rather Top-py Pillow Princess; I love receiving dedicated attention. I just didn’t want this to include penetrative activity. Yet I couldn’t find anything that spoke to my sexual preferences without making it seem like I was missing out on something. I felt inadequate, unsexy, broken.

I figured I couldn’t be the only person with vaginismus or an inability to be penetrated. Sexual assault and rape are highly prevalent around the world – up to 71% of the population according to WHO multi-country studies. According to Vaginismus.com roughly 2 in 1000 women will experience vaginismus, but the number could be higher due to shame and stigma.

What’s with making this a stigma anyway? Why do I or anyone else need to have a justification, medical or traumatic, to not want to involve penetration in sex? Maybe it just doesn’t do anything for you; most women (or female-assigned bodies) don’t orgasm from penetration alone anyway. Maybe you like everything else a whole lot more and would rather concentrate on the sex that feels great, rather than trying to hit arbitrary landmarks. Maybe you’re like me pre-sexual assault, and just find penetration middling.

I feel like we need to flip the Pareto principle around when it comes to depicting sexual possibility: rather than 80% of our attention being spent on 20% of our body (penetration of the genitals), let’s spend more time exploring the other 80% of ourselves: the rest of our body, the mind, the spirit. Here are some ideas for non-penetrative sexual pleasure:

Sensation play. The skin is the largest organ in the body – make use of it! As you can see on my shoot with Kitty Stryker, I’m a major feather fan (*snerk*) and go all melty on scratching. I’m also fond of food play – sweet toppings make me feel and smell so luscious afterwards! (Just don’t put them on genitals lest you get yeast infections). Play with textures, weight, pressure, even different ways of moving the object – slowly pulling a leather strap across the skin is far different than slapping that same leather strap. Remember to explore non-obvious sexual spots – perhaps there are certain points on the belly, or arm, or knee that make your paramour shudder in delight. My male partner got a lot out of Bondassage, a lighter form of BDSM play that is sensation-centric – check their website out for ideas and training.

Oral sex or clitoral stimulation. Yes this is rather obvious, but it can be surprising how many people forget this as a viable sexual option, or overlook it in the rush to ‘fill that hole’. Enjoy the scenery, play around with it. Linger. Change your focus from “this is just foreplay for the big stuff”, a hurdle to get past, to enjoying the moment wholly and you will be very pleasantly rewarded.

Not willing to be penetrated doesn’t make us repressed desexualized people unworthy of love. Queer sex is as much about paying attention to individual desires as it is about moving away from heterosexist ideas. Let’s move the focus away from privileging various sex acts over others, and relish each other for the diversity of bodies and sexualities that we are.

Creatrix Tiara aka Mendhi Henna has just moved to the Bay Area from Brisbane, Australia in the guise of starting grad school. Her real schemes remain semi-secret.