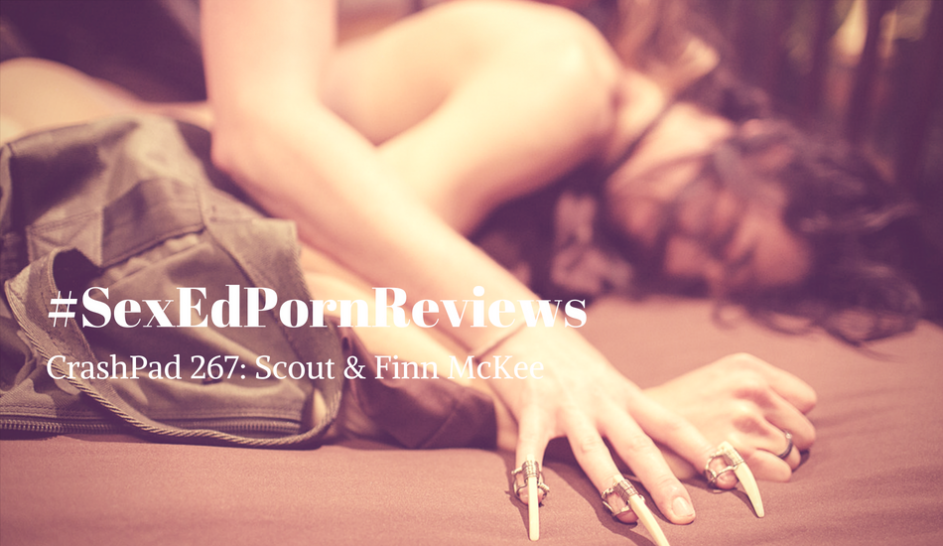 The claws come out #SexEdPornReviews Episode 267: Scout and Finn McKee

Please welcome @MxFinnMcKee to the CrashPad!

"I've admired CrashPad for years and never thought I'd be on camera, but when a pretty girl asked nicely, I couldn't refuse." ~Finn McKeehttps://t.co/ZBck0MQYXQ pic.twitter.com/SdIFSgd8Tk

Dive into the weekend with the newest episode of @CrashPadSeries starring Scout and Finn McKee! https://t.co/D5LmhYxc5B

"You're just gonna cause chaos today, aren't you?"

The claws come out

Skin craves variety. Adding the talons adds a different sensation that will awaken all the senses. #sexedpornreviews

Finn drags her talons all over Scout's body before letting em sit on her face, but Scout has one last trick up eir sleeve…https://t.co/D5LmhYxc5B pic.twitter.com/3DlZZbVIBy

And out come the claws. ? Light scratching is one of my favorite tactile sensations!

OMFG the claws @MxFinnMcKee pulls out to scratch, punish, and tease @villain_ette are incredible and I must get some to play with my partners ❤❤❤ @CrashPadSeries #SexEdPornReviews. pic.twitter.com/g0ZXOTA64O

@Dymmy83 Sure! I got that set from a local vendor at the Folsom Street Fair in SF, after seeing his work around at various fairs for years. Not sure of his name–I'll see if I can find it.

Made by Sion the Troll, I think currently in Oregon, though it looks like their Etsy shop is currently on break: https://t.co/uJqAF2fAW0

You also might have noticed a set of metal banjo picks hanging on my belt right next to those claws :) I was a little too caught up in the moment to put them on as well, but they're a delightfully complementary sensation!

I never would have thought I could repurpose my old banjo picks as a sex toy but there you go. ?

Rope! Look at that multitasking. And that escaper-y. Escaper-y is a word now.

Curious about #ropebondage? Check out this intro to #Shibari from @autostraddle https://t.co/l2zQXFktfB

One of my favorite @CrashPadSeries moments ever now has to be @villain_ette sitting on @MxFinnMcKee's face as ey tie her to the bed before ey just walk away, leaving her to untie herself. Rude! And brilliant ? #SexEdPornReviews pic.twitter.com/x7eDMfCoku

Love watching Scout's bratty bottom behavior and how Finn used it to her advantage. Using Scout's bra as a blindfold was ingenuity. #sexedpornreviews

Think about what does it for you and ask your partner to dress the part and see what fun scenes you can have. Lingerie is more then naughty school girl costumes. #sexedpornreviews

I appreciate that Scout is flagging black on the right. It's the attention to detail that I always love. #sexedpornreviews

Bratty trans dykes are my favorite. Even better tied up! y/n? // Thx Scout @villain_ette and @MxFinnMcKee for sharing your kinky fun with us on @CrashPadSeries #BRAT ? https://t.co/7L0kEM5UqG pic.twitter.com/jEgNZjEW26

Read my thoughts about @CrashPadSeries Episode 267 all in one place here#sexedpornreviewshttps://t.co/3ZNIB8u68w

It's #InternationalNonbinaryDay! Sending validation, visibility, and recognition to all the non-binary adult film performers out there. We see you! pic.twitter.com/ffm2yH8v7E

Affiliate shout out – thanks for the link love, @ChronicSexChat!

Check em out: Chronic Sex aims to open up frank discussions on how quality of life is affected, specifically focusing on self-love, self-care, relationships, sexuality, and sex itself. https://t.co/gznGlIo7Im pic.twitter.com/DekhdVaHVA

I can't lie, I've recreated a few moves from @CrashPadSeries . So many inspirational scenes!

NSFW Sunday: How to have a better sleepover, Ontario’s sex ed curriculum goes back in time, lesbians have better sex, why not to get jaded in your Tinder bio and more. https://t.co/zdjy1A3yAw

Affiliate shout out – thank you Autostraddle (and @c_yates) for "NSFW Lesbosexy Sunday" images and link love over the years. We appreciate your support!

We have to deconstruct what we have been taught about the gender binary, and that is why non-binary visibility is pivotal in the fight for both transgender and non-binary rights. https://t.co/5HWKOzAiuE

Being a sex blogger is lit because every day I learn something new about a sexual niche or how a certain community thinks about/approaches sexuality. It’s so cool ?

I write about sex & I'm a woman so online harassment is something I deal with regularly. Usually I ignore, report, block, and move on. And I will do the same thing in response to the harassment I've received for this piece about how to please trans women. https://t.co/uMHeZt8hGY

#Sex with #Trans and #GNC partners isn't always talked about, so it can be hard to find advice for.
Communication is key. ? Talk to your partner about what works for them. ?https://t.co/pepyzBWkKR#mtf #lesbian #dysphoria #lgbt #TransLivesMatter #TransPride #Pride2018

I was one of the folks interviewed by @LuxAlptraum for this splendid piece on the new experiences of sex after transition for transfeminine ppl: https://t.co/N3tA9KuoXt

I don't have much to add to this question that @PinkWhite and @CrashPadSeries haven't already explored. Highly recommend familiarizing yourself with their work! They have PSAs, some teaching videos … And of course tons of filthy queer sex video

Check out my next FREE Workshop in @PleasureChestNY
Every Witch Needs a Wand Wednesday, July 25th 8PM-10PM
Incorporating vibrators into your partner play, and especially your kink sceneshttps://t.co/y7FJdmydwa

Performers have the last word

Giggles and Chaos! I was enjoying reading bits and pieces of this review out of order in my feed before I realized it was about me… ? @nicoleguappone I appreciate your perspective! https://t.co/ULHIUITbJN

Thanks for the encouragement! It certainly won't be my last :)

[TW sex/porn/sex-trauma/dysphoria; link is soft-NSFW (pretty PG before the paywall)] ? tl;dr we need more documents of trans sex, this is me calling you in for Queer Jury Duty aka helping shoot queer sex — please seriously consider it ? SEX SUXX IKR i didn't grow up with good examples of trans sexuality, in fact i grew up with some /really shitty/ examples of what sex for trans people is like, mostly from mainstream movies but also cis-male pornographers' perspective. the effect was that i thought i couldn't really have sex, or that i deserved to be killed if i tried to have sex, or just that i should have sex like cis-het people and just dissociate 4 lyf. to put it lightly it *really* fucked me up, fucked my relationships up, and got me into a lot of traumatic situations that i tried to tell myself were chill. i'm still seeing these effects on my friends and partners today, and pushing around the "Fucking Trans Women #0" zine isn't enough to change trans culture as a whole. ? but also it wasn't /all/ bad. dysphoria is a bish but there are SO MANY ways to work around it –– i've had a lot of good sex in my life too. and ways to approach it that make it easier and accessible and stuff, that you can't learn just from reading a book. it really sucks about the Missing Generation of trans women, but also we don't need to all reinvent the wheel when there are so many of us working it out. FTW#0 didn't come out until i was like 30, and i'd figured out a whole lot of dysphoria work-arounds long before i even knew about muffing; i just wish i had my 20s back now that i know i don't have to act like someone i'm not in order to hold on to a partner or feel validated in my own body.

Thank you Scout and Finn, and thanks to our panel of sexual health educators and sex bloggers for watching. Want to see see for yourself? Watch here!