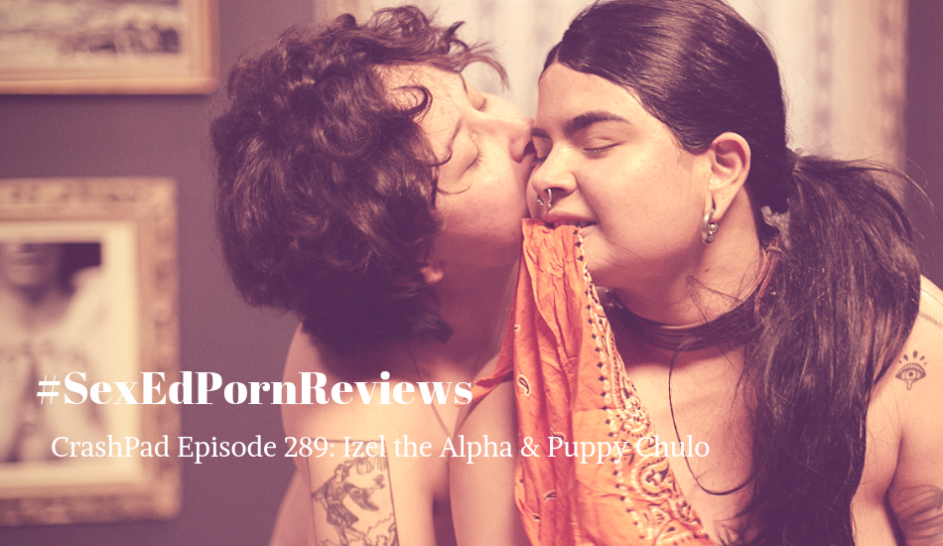 I appreciate your Puppy. #SexEdPornReviews 289: Izel the Alpha and Puppi Chulo

"I want to bring queer disabled sex to folks. I want to highlight different forms of intimacy…" ~ Izel the Alpha#PuppyPlay #QTPOCvisability #QueerPorn

This thread is REALLY good but I want to touch on this very quickly too re: pet play. I enjoy pet play but not in the “stereotypical” way, ie a leashed up submissive in leather with a muzzle on #AVNSFW https://t.co/1eFNCs9TvC

"You did so good!" It's genuinely awesome that the last few minutes of this episode is spent on aftercare with Izel encouraging Puppi Chulo to catch their breath and check in. "Are you okay? Are your paws okay?" Such a sweet moment! #SexEdPornReviews @CrashPadSeries pic.twitter.com/o6RcrbvAYr

"Who's a good boy?" "You're such a handsome boy!" "You're so excited, huh?" It's amazing how wonderful & committed Izel is to affirming & empowering Puppi Chulo throughout this entired scene. That hyper-focus on pleasing such a good boy shines! @CrashPadSeries #SexEdPornReviews pic.twitter.com/5NTOjbccPI

Throughout the scene you see a lot of non-verbal cues for changing things and enjoying activities and I love seeing that! The way Puppi grabs the gag when they want to start using that is entirely great and a good reminder that you can still communicate while in a pup scene. pic.twitter.com/5z6o6IyUA2

Props for puppy play are not necessary. I believe that these feelings are really created by those in the scene. However, this episode does an amazing job of showing off props. Everything from collars to leashes to puppy dog tails.

My personal favorite is the bone gag.

This scene does an amazing job of showing off how to transition from a playful puppy scene into a very sexy puppy pleasing scene.

And holy cow is it is HOT while it does it!

(Slight aside, I really like the simple spelling and math problems idea for pup play, because it allows the pup/bottom to come back out of their mental space at their own place and is still fun and silly, which is kinda a thing I love being able to do with kink.)

Aftercare allows for a space in which we can settle back into our skin from sub/Dom space (or in this case puppy/Alpha space). Speaking specifically of subspace (bottom and puppy space included) the return to one’s typical brain space can be jarring. #SexEdPornReviews

This piece the importance of aftercare and how sub/Top drop can occur, which is a malaise that can set in for folks in the aftermath of a scene. It’s actually more common than folks think and is more likely to occur if there’s been not enough aftercare. https://t.co/JbA98BcPAB

If it wasn't for that kind of exposure and seeing queer people not just being themselves, but being themselves in regards to sex, then I probably wouldn't have made nearly as much progress in my own life and self-discovery.

#ThingsWeLike Pride edition: @CrystalDToys makes beautiful blown glass toys and is a company who gives back, and has supported us for years. (You might recognize their glass toys on CrashPad!) They have a 15% sale during pride month.

Join our affiliate program and earn commission when you use a referral link to share our websites @CrashPadSeries and @PinkLabelTV. We want you!

Here's the info with our parent company @PinkWhite to sign up: https://t.co/fPVGoOdDR7 pic.twitter.com/iaDWkR4swP

The more I explore @CrashPadSeries, the more I fall in love. They're kink-inclusive, use toys, lube, and show safer-sex methods like condoms and gloves being used regularly. They also have dialogue that conveys on-going consent between the performers.https://t.co/GtCfRMhlWw

I know my therapist is a good egg bc she just sent me a list of things to connect w my partner, including a link to @CrashPadSeries

Save the date! On July 20th we're filming two new episodes of https://t.co/6DyOoMgVoG, and you can watch us work in real time through our #VoyeurCam. #QueerPornhttps://t.co/BoXectHHCa

Follow us (CrashPadSeries) on Instagram! We want to be able to link our stories to the amazing queer people + sex positive companies we love, but we need 10K followers to get there. Follow and Share! https://t.co/hkEQNaqGIB pic.twitter.com/RCxvb9Q2ei

Thank you Izel the Alpha and Puppi Chulo, and thank you sexual health educators and sex bloggers for watching. Want to see see for yourself? Watch here!