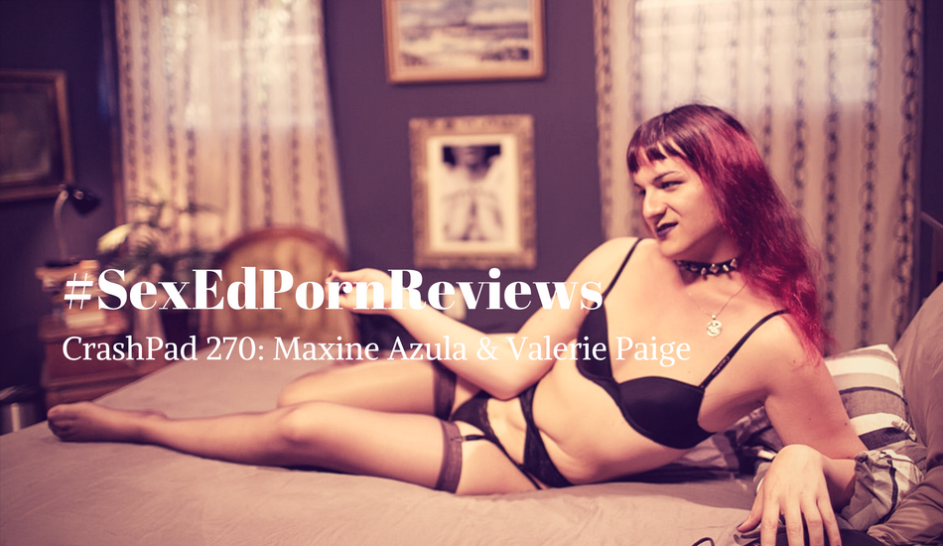 For @tsvalerie_paige I'm equally as excited because she mentions that she plays cello for various punk rock bands. I actually have my music degree in euphonium performance and I am always here for musicians that play slightly unusual instruments. #SexEdPornReviews

Particularly excited to see @MaxineAzula because in their bio they mention being a Performer of Fetish and Circus arts and that is directly in my interests. I'm having having a sideshow themed wedding. So my pervert heart is so happy right now.#sexedpornreviews

One of my favorite parts of @CrashPadSeries is the performer bios. It feels humanizing to see and adds a level to the voyeurism that I also enjoy. It also helps me relate to the performers on a deeper level that goes beyond just attraction which is also fun!#SexEdPornReviews

Caught in the act

LOVE that Maxine is playing with themself wearing the fishnet/tights to start off this scene- that is my favorite, favorite- #SexEdPornReviews https://t.co/bUP4PnNX84

First observation: I like the playful teasing between performers when @TSValerie_Paige walks in on @MaxineAzula, who's already gotten started playing with herself…followed by offering to help. Don't take offense–lend a hand! #sexedpornreviews #ep270 @crashpadseries

On that note, remember lovers: #sextoys aren't your competition, they're your props! As @TSValerie_Paige puts it in #Ep270 of @CrashPadSeries: "Toys are fine, but it's nice if you have someone who can use them." Sounds like a delicious promise to me! #sexedpornreviews

Dress up for sex!

Also we need to talk about their OUTFITS. @MaxineAzula has this amazing lace body-suit with cherry red heels, and @TSValerie_Paige is in…that dress. Wow. They both look SO GOOD!
Watch here: https://t.co/7sdNY7zdTL#SexEdPornReviews pic.twitter.com/llBApjWZCT

the last few months as I've been camming, it's forced me to dress up more.. wearing fishnets or lingerie and some red lipstick makes me feel more confident, sassy, and playful. that's why Maxine's red heels and bodysuit made me so happy ? #SexEdPornReviews

It can really change the dynamics if I am dressed in contrast to a partner in any way.

Of course it matters less once the clothes come off. ?

Talk Dirty To Me!

Dirty talk is all about using the 5 senses, so describing what you're seeing, smelling, tasting, feelings and hearing can be a great jumping off point. @tsValerie_Paige is great at this as she describes the glorious jiggle of @MaxineAzula #SexEdPornReviews

The narrative of playing with yourself and being caught can be such a fun dynamic that can be made even more fun by adding lot's of dirty talk! See more dirty talk tips here!https://t.co/OzG5IbXeS7#SexEdPornReviews

There's a ton of dirty talk throughout the video – some serious, others more playful – plus teasing banter and plenty of actively telling each other what they want. Hearing what my partner wants specifically is always incredibly hot, do you agree with yours?#SexEdPornReviews

the sound of the flogger ???? then the paddle- #AFewOfMyFavoriteThings #SexEdPornReviews

Love the face slaps, would like to work that out with a partner I trust enough to do that during play time #SexEdPornReviews

Paddling adds thuddy sensation to the pelvic floor which is great especially if you're stimulating a g spot during a paddling. And @TSValerie_Paige is hitting @MaxineAzula in the sweet spot where the booty meat meets the thigh meat#SexEdPornReviews

On that note, #foreplay is always good, whether it's actually before, during, or after. And it's mucho important to know that you can ask to slow down or stop at any time. #consentissexy #ep270 @crashpadseries #sexedpornreviews

Tonight I have again the privilege of reviewing another lovely work of aesthetic production by @CrashPadSeries @PinkLabelTV.

Thank you for that.
Truly. https://t.co/lsfhMnQEQp

All in all a great @CrashPadSeries episode. Check out all of my thoughts in one place here!https://t.co/Q2ulF9wviH#SexEdPornReviews

I'm a proud supporter of transbb's getting DICK IN BUTT ??? @TSValerie_Paige and Mistress @MaxineAzula was here at @CrashPadSeries for a mutual strap-on and chill. Sprankle in some new school hitachi and oooow! Excellent form, Mistress! // [WATCH] https://t.co/6zn6KSI09o pic.twitter.com/6KMaY2m703

I got to accomplish a major goal and do a scene for @CrashPadSeries; something I've wanted to do for a couple years. And now, the epic scene I did with @MaxineAzula, who fucked me harder than I've ever been fucked, is now available to view ?https://t.co/fyRUTDrh9z

Here are some sexy pictures from our epic scene for @CrashPadSeries Thanks @tristancrane/@PinkWhite. A huge thanks to @TSValerie_Paige for owning it in the scene, taking the glitterdick like a champ and being the gold standard for clean bootys. https://t.co/lfgwQJYQLS pic.twitter.com/0ggMpuqGsU

Travelling back to the East Bay after a busy day of shooting smut ?? #queerporn #ThatGayShit pic.twitter.com/RcpQm8f4EB

Do you typically watch behind-the-scenes or after-shoot footage? It always has really touching moments; it's like you get to watch their aftercare, & I like learning what THEIR favourite points are + what was harder.

I really appreciate that @CrashPadSeries has behind the scenes and shows the performers talking about the scene, how they feel about it, safe sex practices, and getting to know them. #SexEdPornReviews

Again, I gotta talk about how fucking incredible the sound is in @CrashPadSeries scenes. You can hear EVERYTHING from @TSValerie_Paige & @MaxineAzula. Every moan, gasp, whisper, shudder, it's all there and none of it sounds faked or forced. This is REAL fucking. #SexEdPornReviews pic.twitter.com/QGhvlNVpKf

Something I love about @CrashPadSeries is that they give performers full control of sex acts, clothes, barrier usage, + dialogue, which makes a HUGE difference. Everything in the videos was chosen and wanted by the performers. They also provide equal pay!#SexEdPornReviews

Closing out this #sexedpornreviews with a nod to @TSValerie_Paige & @MaxineAzula for making #eroticart in the face of SESTA/FOSTA. Your work is beautiful & valued & important. Visibility, empowerment, beauty. #ep270 @crashpadseries #sexedpornreviews

Note to everyone of every gender & body: #vibrators are fun for almost every anatomy! Take @TSValerie_Paige and @MaxineAzula's advice and try it on all kinds of bodies. Your #MagicWand won't let you down. #ep270 @crashpadseries #sexedpornreviews

So…the sex? Oof ? They use a Magic Wand, strap-on fuck each other, use toys manually, and use floggers & paddles (the paddling-while-fucking may have been my favourite!). AND they use a variety of different positions – some way more athletic than I could do!#SexEdPornReviews

Vibrators ARE for EVERy body- as I said, I don't own the magic wand, although I did get to try it this one time in a dungeon ? my fave vibrators are the Noje Wand, the Satisfyer pro plus vibration, and the Marvelous Flickr- what about you? #SexEdPornReviews

OH! She has the strap on now- I think I have used this harness before!!! It's been a few years, though. A high quality is sooo important!!! #SexEdPornReviews

The MAGIC WAND! Can ya'll believe I still do not own one of these? I'm missing out … #SexEdPornReviews https://t.co/lJHSre3MHt

This episode inspired me to pull out my fishnet bodysuit & to think about trying strap-on play again soon. #SexEdPornReviews

You know, if you're having penetrative sex but want to take a break and go back to foreplay for a bit, it can really ramp up the intensity of your connection. @TSValerie_Paige and @MaxineAzula show how in #Ep270 of @crashpadseries, and it looks DELICIOUS. #sexedpornreviews

Save the date! Our next livestream is Saturday, September 15th. Log in to watch us work in real time as we film two new CrashPad episodes! #CrashWithUs #VoyeurCam #PornIsWorkhttps://t.co/BoXectHHCa

Thank you Maxine and Valerie, and thanks to our panel of sexual health educators and sex bloggers for watching. Want to see see for yourself? Watch here!