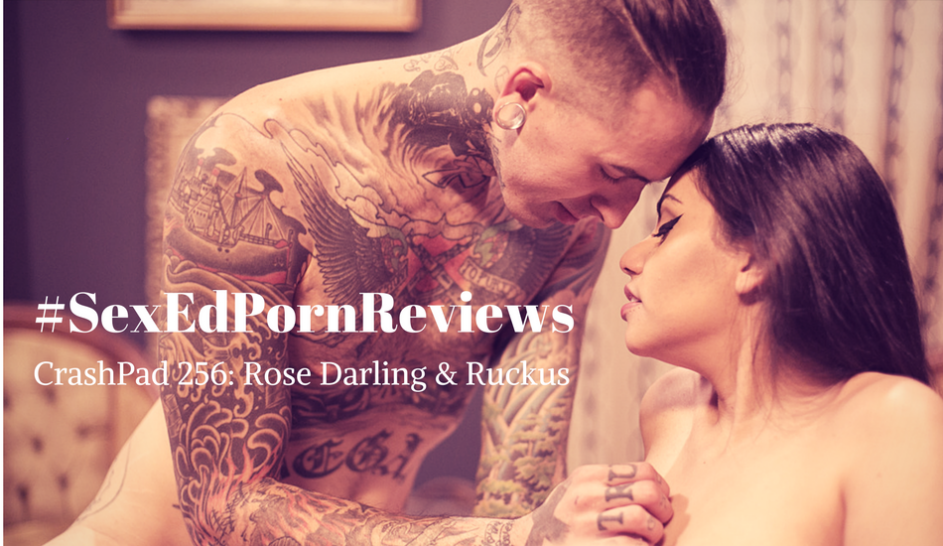 CrashPad performers script their scenes and bring their own sex acts and desires to the set, and in this scenario, the two brought sweet chemistry and sexy 69’ing — Is the position making a comeback? Did it ever really leave? What did our reviewers think of the episode? This week… CrashPad Episode 256: Rose Darling and Ruckus!

And @RuckusXXX has been a long time crush of mine. Any sex worker out and proud is someone I watch. And to learn in their bio that they love dogs and have a motorcycle. Major swoon!!#sexedpornreviews

Suuuuuch a cutie with claws! ???

Watching @CrashPadSeries episode 256 with @RoseDarlingxxx and @RuckusXXX. Both of them are absolutely gorgeous. I must admit that I’m slightly distracted by Rose’s nails. I keep wondering how they might be used. #SexEdPornReviews #PornScholarSaturdayNight pic.twitter.com/mGADbjh3Q6

One of the things I love the most about @CrashPadSeries is the consistent demonstration of on-going consent & not the mood killer anti-enthusiast consent folks make it out to be. @RuckusXXX & @RoseDarlingxxx ask permission & communicate wants. It’s super sexy #SexEdPornReviews

69 and other sex styles

69-ing is making a comeback!

Yes! I was just talking about this with my sex Coach. https://t.co/ZL0nDrKGxm

"I mean, I love having my ass played with, so…" Nonchalant, confident sex talk rules ❤️As somebody who still hold a lot of internalized shame feels, believe me when I say that hearing those positive proclamations is immensely empowering. @CrashPadSeries bts #SexEdPornReviews pic.twitter.com/wjXtsDri5Q

It took me well into my late twenties, bordering on my early thirties, to learn that there are so many other ways for a person with a penis to experience pleasure that isn't PIV. @CrashPadSeries Ep. 256 features a lot of those great alternatives! #SexEdPornReviews pic.twitter.com/ye8FVxSZ2a

Ruckus is nonbinary. And lucky, yes! They both are lucky, and so are we ?

Vibrators are for every body

I think people forget that you can use the Magic Wand on any body. Using it on the perineum and right under the head of a penis feel amazing for folks with a penis!#sexedpornreviews

The volume might be due to being on a lower setting. Where the old model has 2, the new one has a range of 4! Anyone else want to buzz in with info? ?#magicwandvibrator @goodvibestoys @hitachimagic #sexedpornreviews https://t.co/pEa0lCV4y6

And the @HitachiMagic makes an appearance…this is mandatory for all sexcapades, especially in the @CrashPadSeries universe and should be a staple for everyone. Great use by @RoseDarlingxxx on @RuckusXXX #SexEdPornReviews

Still Holding Each Other

Things that are solutions to sexual harassment and assault:
– repairing sex education
– making it safer for victims to report
– actually holding predators responsible

"Being an ally to sex workers means not just vocally supporting them, but financially as well."

Thank you for your support, whether it's thru studio #PayForYourPorn or directly with individual SW artists. @_une_femme_ ? https://t.co/5nNf59IGVr

All in all, super hot scene with 2 super hot people. Check out my thoughts in one place right here.https://t.co/MHOgF0TCJe#sexedpornreviews

15% off any level membership at @CrashPadSeries?
Holy cow!!
Use code QUEERLOVE through 2/28 and feast your eyes on sexxxy, queer, kinky (and vanilla), authentic sexual expression.https://t.co/3rqK0NDBxu#PornOnABudget pic.twitter.com/jM08qGnotd

These sites are *actually* worth the money. https://t.co/joqF7xKqDE

Sign up for @CrashPadSeries via my affiliate link! Use QUEERLOVE for 15% off. https://t.co/rgg3bXWeY1 #PayForYourPorn the best things in life aren’t free.

Thank you Rose and Ruckus! Thanks to our panel of sexual health educators and sex bloggers for watching. Want to see see for yourself? Watch here!