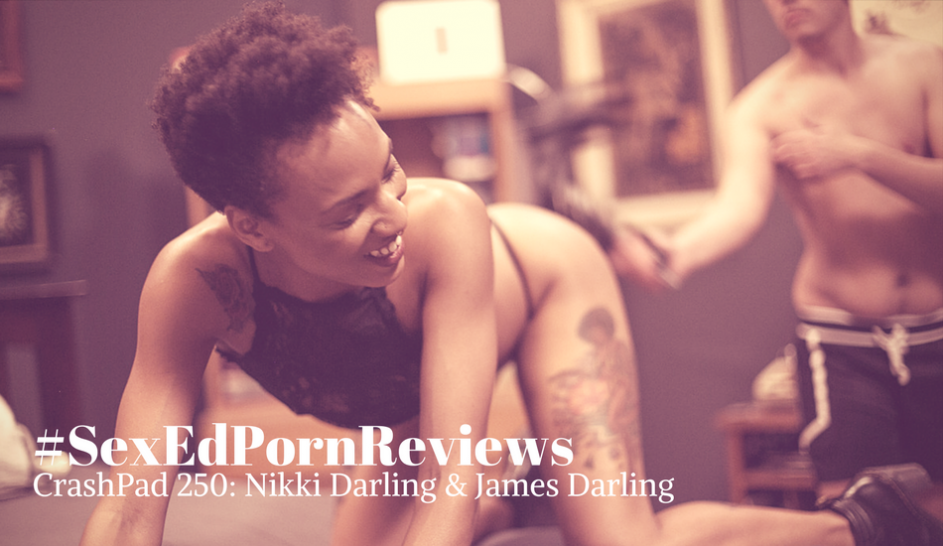 They had me at the first throat grab and smacked ass. ????
“Good girls gets orgasms.” ~@Nikki_Darlingxo
Gawd, yes they do and really good girls get big squirty ones in Ep. 250 of @CrashPadSeries #SexEdPornReviews https://t.co/1qrhO8owdv

Rather then the one "money shot." #SexEdPornReviews

SPANK YOU very much

It begins with a spanking, which I usually skip over… but something about James' precision and focus, and Nikki's genuine joy, is so hot. https://t.co/PD1SYap6lD #SexEdPornReviews

Never be afraid to combine sex acts. Clit rubbing while being fisted with a bit of spanking on the side? Yes please. #SexEdPornReviews @CrashPadSeries pic.twitter.com/Y536JgH15h

These two are a match made in all of my queer fantasies. First of all, hands hands hands! Fingers, spanks, hands, more spanks. The fore play was on point. As a natural submissive, I love being handled with care and dominance. pic.twitter.com/zBMWUTCWJS

And next into some spanking with the PERFECT bit of check in.
Nikki: Your hands feel so good.
James: You want it harder than that?
?Y'all, it doesn't have to be awkward or break the sexiness of the scene; check ins can still be hot.https://t.co/xB5R4q7Bea #SexEdPornReviews

This is in close competition for my favorite scene to show people how to suck cock. @ArabelleRaphael and @DevorahReine are in great company. #sexedpornreviews

This scene is all about sounds. Like Nikki's wetness right before she squirts… https://t.co/PD1SYap6lD #SexEdPornReviews pic.twitter.com/cQflwQaLCa

I love that you can hear all the squelching motions in this episode. Sex produces a variety of noises, all of them sexy AF. #SexEdPornReviews @CrashPadSeries @jamesdarlingxxx @Nikki_Darlingxo

I'm ded now. Just so you all know. https://t.co/xB5R4q7Bea #SexEdPornReviews

"Can I jerk myself off while you do that?" James asks Nikki, and not only is it hot as fuck, but he's also (probably inadvertently) modeling good sexual communication. https://t.co/PD1SYap6lD #SexEdPornReviews pic.twitter.com/6DBHLsqzco

The look on @Nikki_Darlingxo face is pure bliss and her breathy "thank you" followed by telling him how bad she's been and her begging for a flogging has me craving a sub of my own right now. #sexedpornreviews

Letting the top know how much your enjoying things makes for a better play session. and like @Nikki_Darlingxo said "gratitude is important" #sexedpornreviews

The 'thank you's' are coming strong in this episode (along with the stars). Sex, gratitude, and clear enjoyment. @jamesdarlingxxx and @Nikki_Darlingxo are experts at enthusiastic experiences. #SexEdPornReviews @CrashPadSeries

@JamesDarlingxxx has perfect technique for stimulating a g-spot! Using the pads of your fingers, angling towards the belly button and rubbing @Nikki_Darlingxo clit. You can hear how turned on she is, and it's so hot! #sexedpornreviews pic.twitter.com/y5mto3EwUE

I always appreciate the discussion of safer sex practices. It's fascinating to hear the things people do from testing to barriers to birth control often incorporating several methods at the same time. #BTShttps://t.co/xB5R4q7Bea #SexEdPornReviews

"I'm so glad we finally got to fuck" @Nikki_Darlingxo
Me too, me too ?#SexEdPornReviews

"Feeling cumdrunk."
As when one has experienced many many delicious orgasms making it challenging to string together thoughts and/or sentences.#BTShttps://t.co/xB5R4q7Bea #SexEdPornReviews

A year later, we’re… Still Holding Each Other

It's the most popular toy at CrashPad for a good reason! Thanks @GoodVibesToys for gifting us with the gift that keeps on giving! #ThingsWeLike https://t.co/gyJnYbhlIF pic.twitter.com/gbj6CWHBS5

Btw they used the Cordless Magic Wand in @CrashPadSeries #Episode250 which is one of my TOP FAVORITE GO-TO vibrators evar. I reviewed it a while back. It's totally worth it.#MWRChttps://t.co/1hk0FejCAX#SexEdPornReviews

Thank you Nikki and James! Thanks to our panel of sexual health educators and sex bloggers for watching. What did you think of the episode? (Leave your comments below.) Want to see see for yourself? Watch here!