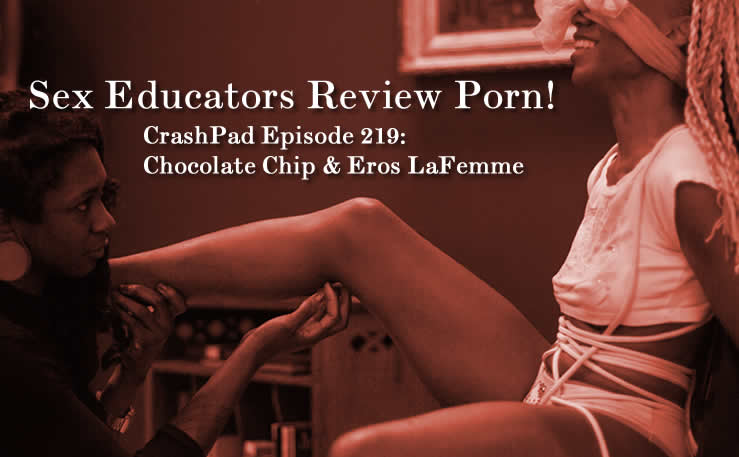 But first, THIS thread.

@BlasianBytch ✨???✨ I've been hoping for a Black voice to chime in on this scene & I am so happy & grateful for your feedback! Much love~! ?

@eroslafemme Its so rare to see, I remember when I started camming I was afraid to have natural hair because it wasn't "sexy" enough

@BlasianBytch Absolutely. #eurocentricbeautystandards make it hard to get widespread recognition, but that's why there's @CrashPadSeries ?

@eroslafemme yep! @CrashPadSeries taught me I didn't have to look like "them" I could unapologetically be me.

I had a lot of thoughts about @CrashPadSeries's Episode 219. Too much to fit under 140 characters! #SexEdPornReviews pic.twitter.com/eYZgUayb7b

What a striking episode! There were times during this episode where the sexual tension was so palpable that I actually found myself holding my breath as I gazed intensely at the scene unfolding in front of me. Fully immersed, I felt as if I were physically there as a true observer witnessing an incredibly intimate exchange.

This sensation was facilitated by the deliberate contrast between the two performers. Nonbinary femme cupid Eros LaFemme rocks baby pink rope and Hello Kitty panties while a sterner Chocolate Chip, dressed in all black, explores their body with commanding eyes and a sure hand.

Near-silence for most of this episode makes every utterance all the more intense. A soft giggle. A sharp slap. A gentle gasp. Each time the silence breaks it feels incredibly meaningful.

Throughout the entire episode Chocolate Chip remains fully clothed while still delivering a mesmerizing sexual experience which both performers clearly enjoyed. I think this is so important in terms of challenging the sexual status quo and conventional notions of what constitutes ‘sex’. The simple truth that this episode conveys is that sex comes in all shapes and sizes, and involves all forms of attire, be it rosy rope or black jeans.

So many sensitive zones are on our bodies waiting for play, explore find their spot,experiment on how to stimulate it #sexedpornreview

The pink. The giggles. The bows. The rope harness. Their smile. @eroslafemme is cute to their core. #aestheticgoals. #SexEdPornReviews

Chocolate Chip is in control, expanding on the different ways to dom from last week they use silence to tease. #Sexedpornreviews

My first #sexedpornreview for @CrashPadSeries and it's brilliant. @eroslafemme and Chocolate Chip deliver a beautiful, raw intensity.

We are more than our nipples & genitals, explore thighs, elbows, napes of necks , backs of knees and be amazed #sexedpornreview

The way @eroslafemme's body moves in the latest @CrashPadSeries ep is art in motion. I hope we see more from them soon! #SexEdPornReviews

.@eroslafemme's suggestion that communication is the most important part of safe sex is so on-point. #SexEdPornReviews #behindthescenes

Aftercare & Behind the Scenes Love

The behind the scenes for this @CrashPadSeries episode is enthralling too (not to mention adorable and insightful!) #SexEdPornReviews

So happy to see that bit of aftercare <3 retying a bow and putting socks back on is a small but adorable action. #SexEdPornReviews #ep219

“Aftercare is rarely represented in adult film, and many kinksters say it’s the best part.”
~ Lucky – (Lucky loved the episode so much she wrote a full review. Read Blindfolds, Silence, Aftercare.)

That hair, that hair! So fabulous. Great discussion of aftercare in the behind the scenes film. The importance of caring for each other after a scene can be forgotten in the heat of play, even when you are performers in a movie. The responsibility and respect these two feel for each other is important; I like that it is explicitly addressed.
~ Jenny Guérin @writtenbyjenny

I have the hardest time articulating my thoughts post scene, but I managed… a little? https://t.co/APBNtyy2uB https://t.co/hK4mJysBPU

Something I didn't get to see until the @CrashPadSeries ep came out ??? #chills https://t.co/APBNtyy2uB https://t.co/IVhZ8xKhy4

Communication only fans the fire when it comes to #safersex practices~? https://t.co/exUiXFF2Tw

Thank you Eros LaFemme and Chocolate Chip, and thanks to our panel of sexual health educators and sex bloggers for watching. What did you think of the episode? (Leave your comments below.) Want to see watch for yourself? Watch here!