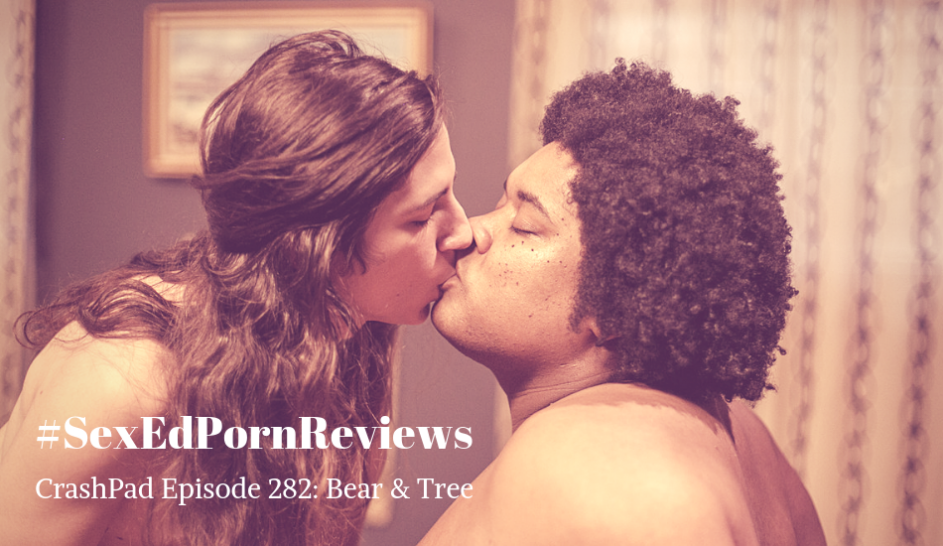 Non-verbal communication is sexy too #SexEdPornReviews 282: Bear and Tree

And I love that Bear was a large person. She was great to watch and I'll always applaud the choice of diverse body types having fun, sexy times! Also her afro is amazing and if I could grow one that big I would in a heartbeat! pic.twitter.com/5BAUga1mai

While Tree and Bear mentioned that they don't use protection with each other, you might want to get yourself a box of non-latex gloves if you try this. It'll give you a smoother surface to work with, but you have less of a chance to poke at something sensitive with your nails. pic.twitter.com/Uu9CKnjZch

When getting fisted, I need a lot of lube around my labia or else my hair will become a problem. And the fact that my labia are so large will definitely cause some friction without it. Ass cheeks too, but that's a less-often used hole (unfortunately).

Quiet is okay too

So, first thing that struck me about the episode was that it was VERY light on talking, but not light on dialogue. There were a lot of looks and gestures that made it easy to tell that the two performers were very comfortable together and that things were communicated. pic.twitter.com/NRUXIDfyqx

We hear Bear telling Tree what she likes (squeeze harder). This type of communication is absolutely fundamental. How does someone know how a person likes to be touched, unless they’re told? So practice sharing what you like. #SexEdPornReviews

What we see between Bear and Tree in this episode are excellent examples of how non-verbal consent can work. Consent is fucking sexy, y’all. The sexiest thing I can think of. It doesn’t always mean dirty talk or verbalizing. BUT it does ALWAYS mean communication #SexEdPornReviews

I really love how focused the performers are in this scene. They are really intense, although there is a lack of noises/words that I am struggling with a bit.

However, it's such a tender and gentle scene that I can't REALLY object.

Finally, I really wanted to point out the wonderful, tender moment at the end where Bear and Tree hold hands. I just LOVE that kinda connection and just enjoying your partner's presence after all the fun sex stuff! Definitely glad that was added. pic.twitter.com/5iVkahjWw2

And that's it for today's #SexEdPornReview ! Thanks to @CrashPadSeries for letting me do this review, as well as Bear and Tree for having a tender, fun, and well done sex scene that gives a nice soft edge to a "harder" sex move! Ya'll should definitely check it out!

We’re back with our second shoot of the day. Tune in and watch (live!) as we film a new CrashPad episode with #Lafemmebear and Tree! #CrashWithUs

And it's a wrap! Thank you Tree and #LaFemmeBear for a sexxxy scene! Finished episode coming soon to https://t.co/6DyOoMgVoG. Turning off the #voyeurcam. Catch us for our next shoot on February 9th. #CrashWithUs pic.twitter.com/jhkP6lzudc

Save the date! Our next livestream is Saturday, March 9th. Join us and watch as we film two new episodes for https://t.co/6DyOoMgVoG in real time! #CrashWithUshttps://t.co/BoXectHHCa

Thank you Bear and Tree, and thanks to our panel of sexual health educators and sex bloggers for watching. Want to see see for yourself? Watch here!