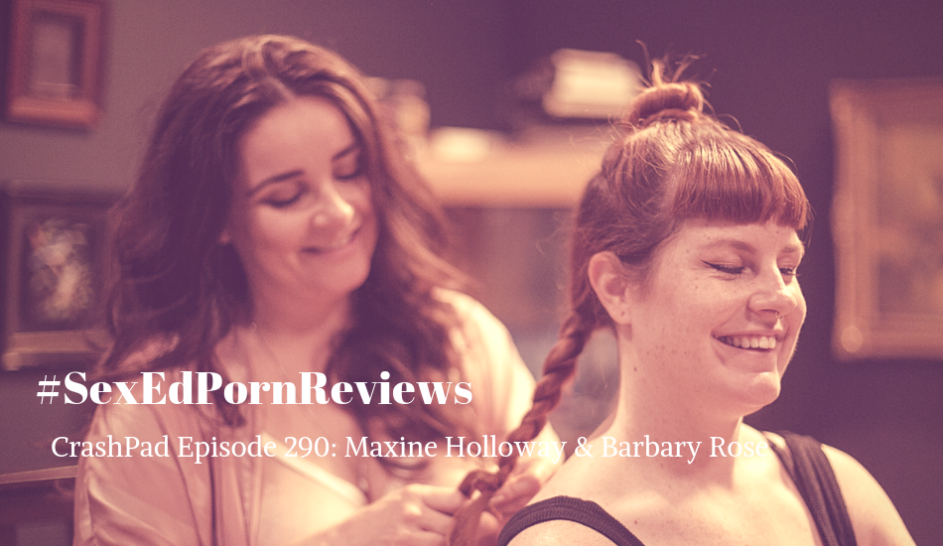 Initial thoughts are that I wish @MaxineHolloway had a more in depth bio. The performer bios are one of my favorite parts of Crash Pad Series. Excited to see her episode after giving birth because having kids doesn't stop you from being a sexual being. #SexEdPornReviews

And @XOBarbary is one of my favorite Crash Pad Series performers. I love her energy and I think she is a total babe. Excited to see her newest episode especially since it involves human milk!!#SexEdPornReviews

Kicking off #WorldPride by catching up on the latest from the @CrashPadSeries. Featuring @MaxineHolloway & @XOBarbary, this scene is FANTASTIC! I love that the Crash Pad did a scene with a postpartum babe, breast milk expression, and the mommy role play was c'est parfait.❤️??

Also interesting to watch someone role play as mommy without necessarily doing a complete "little" scene. Being mommy, and being a caretaker can be a really intimate and tender role playing scene. Earning mommy's milk by braiding her hair is a great way to prep #SexEdPornReviews

"My sexuality and sexual desires didn't stop while pregnant and they sure haven't stopped after giving birth either." ~ @MaxineHolloway

Another kind of fluid

The pervy joy of watching @MaxineHolloway squirt milks into @xobarbary mouth while she's using the magic wand is I think the best thing ever!#SexEdPornReviews

Keep in mind to treat breast milk like any other sexual fluid you would exchange. For safety reasons you should be fluid bonded with the person you're doing this with, and everything that goes along with that.#SexEdPornReviews pic.twitter.com/msKIzcvrCb

Hell yes! Related: an article on CrashPad’s blog where performers sounded off and gave tips on fucking with nails: https://t.co/KARuC3wCYa

I've had long nails & short, and partners whom have had either, as well. Being careful is key, to your partner & to yourself. Just a note: I've fisted with nails & had times where I dug them hard into my palm, so I wouldn't hurt my partners. #whatwedoforlove ? https://t.co/AItmSPyxoL

Read all my thoughts in once place about @CrashPadSeries Episode 290 #SexEdPornReviewshttps://t.co/s1HNJW9ZON

Sex work is a part of LGBTQIA history whether you like it or not. ?️‍?

A 45 yr old Latinx trans man returns to his birthplace – Albuquerque, New Mexico – in search of the origin of a secret lesbian code he learned when he identified as a teenage dyke in the 80s.​

Join our affiliate program and earn commission when you use a referral link to share our websites @CrashPadSeries and @PinkLabelTV. We want you!

I know my therapist is a good egg bc she just sent me a list of things to connect w my partner, including a link to @CrashPadSeries

CrashPad's director @ShineLouise is featured in @Allure_magazine! (Thanks to @BlkGirlManifest for the interview and putting the spotlight on our work.) https://t.co/3oZFjfMQYO

The magic of @CrashPadSeries is that everyone who wants to be sexual is. There's no such thing as too fat, too old, too disabled, etc to leave your sexuality behind. Seeing someone after they've given birth owning their sexuality is great and empowering for me #SexEdPornReviews

Save the date! On July 20th we're filming two new episodes of https://t.co/6DyOoMgVoG, and you can watch us work in real time through our #VoyeurCam. #QueerPornhttps://t.co/BoXectHHCa

I will be joining the Bay Area Doula Project on 7/11 – hosting a discussion on ways to support sex workers through prenatal and postpartum care <3 https://t.co/39OIhvqld6

We’re trying to get 10K followers so that we can include links in our stories and share the love promoting the amazing people and queer-run companies in our community. https://t.co/hkEQNaqGIB pic.twitter.com/c1KPkXxRTn

Thank you Maxine and Barbary, and thank you sexual health educators and sex bloggers for watching. Want to see see for yourself? Watch here!