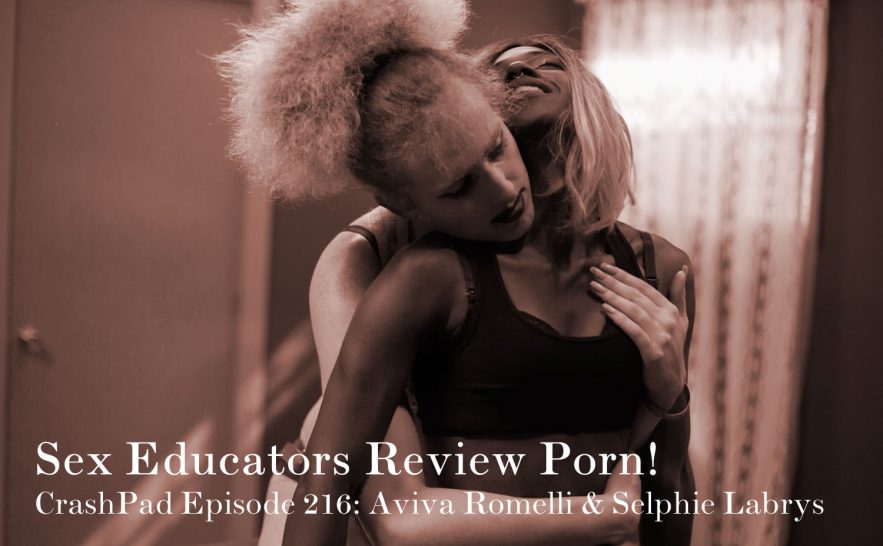 Here’s what they had to say:

“I really appreciate that Selphie asked for her tics to remain in the episode instead of being edited out, as well as for speaking so candidly during the Behind the Scenes portion about her sexual experiences as a person with Tourette Syndrome. Watching her and Aviva play in such a sexy and frisky scene was a treat.”
– Mx Nillin Dennison of mxnillin.com

“Really loved the honesty and vulnerability that these amazing performers showed, in both their performance and the behind the scenes interview. Thank you so much for expanding my views and knowledge. Aviva and Selphie were both so incredibly tender. I wish everybody communicated as well during sex as they do.”
– Marije @vialuce

“I liked how matter of fact it was, and how much fun the two performers were having in the scene. It was very real. Their bits of conversation reminded of how I have sex. When one performer asks, ‘You want two fingers in your butt right now?’ I couldn’t stop grinning at the realness in that.”
-Andrew Gurza, Founder Deliciously Disabled @deliciouslydrew

“Avivia and Selphie show how much communication (and lube!) is necessary to make strap-on sex comfortable and fun. The episode shows you that check-ins can be sexy and sweet, and not ruin the mood, and then the performers talk about the importance of communication in the behind-the-scenes clip. As I was watching the behind the scenes clip, I was tempted to quote every line – so do yourself a favor and watch the whole thing. I’ll just quote this, because Selphie perfectly sums up one of the things I love about Crash Pad” “I get to have sex the way I want to be having sex, and get paid for it.”
– Stella Harris stellaharris.net

“I felt like I was witnessing something completely un-staged. I am simply allowed to view it. It felt so honest. The voyeurism can make it feel really hot.”
– Jenny Guérin @writtenbyjenny

Twitter’s where it’s at!

Episode 216: Consent is sexy, and so is this episode! Selphie asks Aviva with two butt plugs in both of her hands, "A or B?" @CrashPadSeries

Aviva and Selphie show such wonderful communication! I love when Selphie offers Aviva two toys saying "A or B?" #SexEdPornReviews #ep216

The amount of body-safe sex toys in the @CrashPadSeries always brings a smile to my face. Education through action FTW. #SexEdPornReviews

Talking during sex does not break the sex illusion. Aviva and Selphie highlight this in their behind the scenes discussion #SexEdPornReviews

yes! communicate your needs. Nothing is hotter then someone who knows what they want. #SexEdPornReviews

Beauty:
Aviva: "I want your fingers."
Selphie: "I want to feel your heartbeat."
I teared up @ Ep. 216 of @CrashPadSeries #sexedpornreviews

Also kudos to @CrashPadSeries & to Selphie for being brave & beautiful & honest re: Tourette Syndrome! Gorgeous! #sexedpornreviews

That was the sweetest cuddle hug at the end. #SexEdPornReviews

The Behind the Scenes video also got love!

Trans identity and anxiety are topics being discussed in the latest @CrashPadSeries behind the scenes. #SexEdPornReviews

Why I love @CrashPadSeries summed up in a bts quote: "I get to have sex the way I want to be having sex.”https://t.co/uUN4L5lx1F

Leaving in the Tics from Selphie's Tourette syndrome without saying sorry for them was really empowering to see. @CrashPadSeries thank you.

.@CrashPadSeries is a pleasure revolution. Bringing visibility, not editing out the difficult bits, & showing people as they are.

Thank you Aviva and Selphie, and thanks to our panel of sexual health educators and sex bloggers for watching. What did you think of the episode? (Leave your comments below.) Want to see watch for yourself? Watch here!