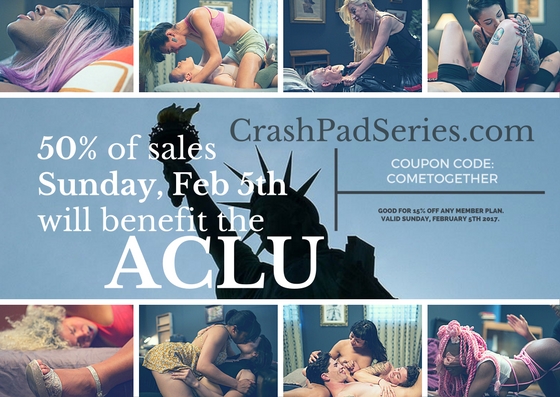 Come Together to Support the ACLU

On January 27th, U.S. President Trump enacted an Executive Order banning travel from seven countries of Muslim-majority faith. The ban resulted in detainment of hundreds of innocent people, and terrorist attacks on mosques. While the ACLU was quick to respond with legal action, more work is to be done.

Pink and White Productions stands in support of the ACLU and the values they fight to uphold. Director Shine Louise Houston released a statement on Twitter announcing that she will refuse to fly until the travel ban is completely reversed.

We will resist, by coming together.

Many of CrashPad’s cast and crew are already donors to the ACLU, however we wish to extend our efforts even more. To this extent, Pink and White Productions pledges to donate 50% of all sales made Sunday, February 5th from CrashPadSeries.com.

Furthermore, new subscribers can use code COMETOGETHER for 15% off the price of any membership plan. We also encourage everyone to join the ACLU or make a one-time donation, and to see ACLU.org/Action for more ways to get involved.

Thank everyone who signed up or shared our fundraiser promotion — we were able to donate $2,137 to the ACLU! We’re thrilled to see the halt and likely dismissal of the travel ban! Let’s continue to resist, to be involved, in whatever way we can.