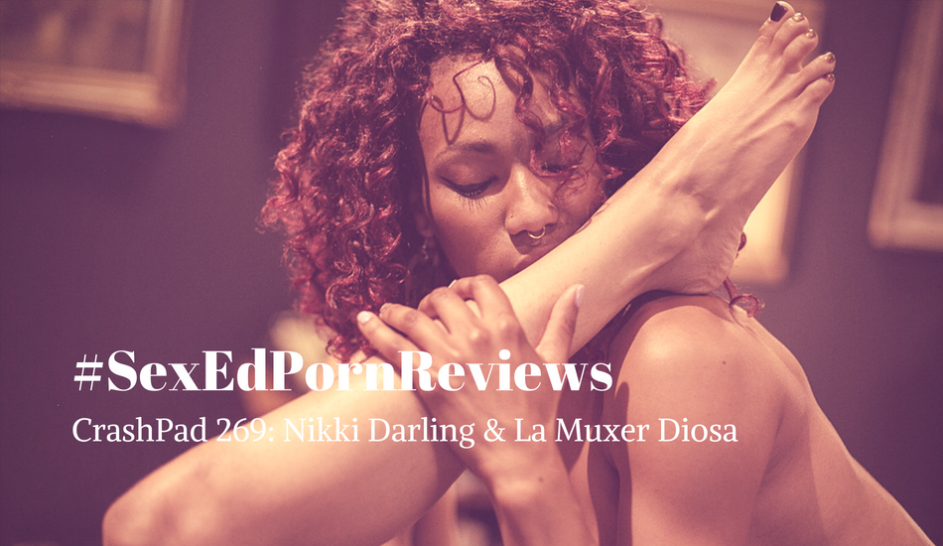 LA MUXER DIOSA is back at the CrashPad! #FemDomme #QPOC #goddess

And their banter is SO CUTE.

The playful, teasing striptease from @Nikki_Darlingxo that opens @CrashPadSeries Ep. 269 is REALLY hot and I think it's fair to say that almost everybody who watches it will have that same excited smile on their faces as @MuxerDiosa did. #SexEdPornReviews pic.twitter.com/uMAF69axDt

I JUST GOT TO THE PART WITH THIS DENTAL DAM.

And when she bit the wrapping to pull it off the roll, may I just say dental DAMN.

OMG I have never seen plastic wrap used during sex, let alone as a dental dam, & I gotta say it's pretty fucking sexy looking! I actually think it would lend itself nicely to some low-cost rubber, latex, PVC and/or plastic fetish play ❤️ #SexEdPornReviews @CrashPadSeries pic.twitter.com/obDHPl8bnF

This is my favourite barrier for oral sex. Thin, clear, adjustable for size, and almost always available.

This is the best photo that shows off the thigh harnesses I am LOVING right now. (Its a spoiler, because I haven't gotten that far yet).

Also, that barrier is not sexy-looking but damn is it a turn on to see it. pic.twitter.com/FuAAJOlct7

Barriers might look sexy to some, and not sexy to others. But the sexiest is when performers want to use them and we celebrate that agency! #SaferSexy

I love that they are becoming more normalized. I think my initial reaction was because I wasn't used to seeing them!

But it all seriousness, please practice safer sex, and also appreciate what these people have made here. The performers, the crew, the director, the marketing team, everyone who made this possible- they're artisans.

@Nikki_Darlingxo sucking on @MuxerDiosa's toes while they share a magic wand was incredible, and about when my partner had to finally come see what I was watching cause it "sounded amazing". @CrashPadSeries Ep. 269 is A+ content for feet and/or booty fans #SexEdPornReviews pic.twitter.com/Gv8oaRIlqa

So I don't have a foot fetish myself, but I am thoroughly enjoying watching someone be excited about feet.

+ Where do you buy them?

First few responses are coming in – thank you to everyone who has retweeted and shared the questionnaire so far – #sexresearch for women over 18 about #pornography More details here: https://t.co/m0uN8Sn3kE

@CrashPadSeries would you tell your readers that I'm editing the next edition of Best Lesbian Erotica & I'd love dirty submissions? deadline aug 31 (but can be extended, just email me) https://t.co/J0kLQ4tWIM pic.twitter.com/QfP6P442fN

We love the new podcast, @auralsexx. Coming soon to a podcast platform near your ear bud! In the meantime, listen online at https://t.co/gHMmTd3qmC. #ThingsWeLike #EroticaStories #SexualHealth #LGBTQ #Podcasts https://t.co/KnrUNO0iqd

Save the date! Our next livestream is Saturday, September 15th. Log in to watch us work in real time as we film two new CrashPad episodes! #CrashWithUs #VoyeurCam #PornIsWorkhttps://t.co/BoXectHHCa

Thank you Nikki and Diosa, and thanks to our panel of sexual health educators and sex bloggers for watching. Want to see see for yourself? Watch here!