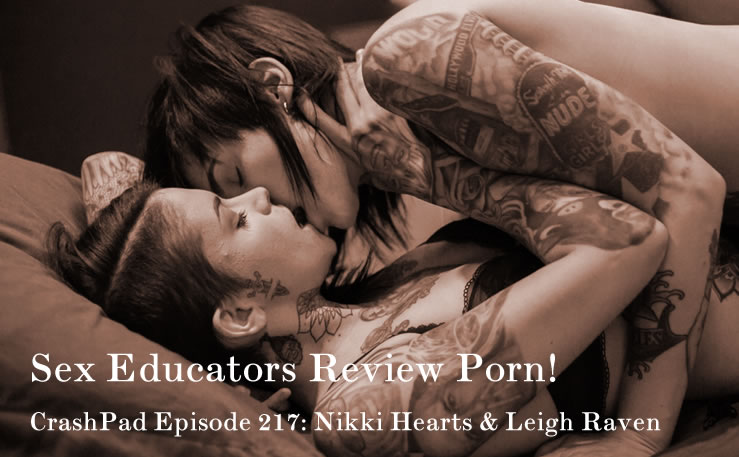 Here’s what they had to say:

The cheeky power-play between @NikkiHeartsx and @leighravenx conveys an irresistible sense of warmth and willingness. #SexEdPornReviews

“From the very first shot of this episode—an intimate close-up of arms bound to the bedpost—I was instantly captivated. The beautiful smile and receptive nature of Nikki Hearts as Leigh Raven swiftly heightened my sense of enthrallment.

What followed was a flogging and finger-fucking extravaganza which consistently managed to demonstrate effective communication practices throughout. The sincere affection between Nikki and Leigh shines through in every action and makes watching them a true delight.

#217: Equal play, and equal consent is rife in this episode! @CrashPadSeries pic.twitter.com/z7bnq8qQyw

A swift flick of the flogger followed by an attentive “Are you okay?”. Perfect communication in the latest @CrashPadSeries #SexEdPornReviews

“A tender scene. It was very very sweet. I really loved the focus on the subtle bodily reactions that Nikki showed during the scene. Showing that sexual experiences don’t always have to be very outgoing to have an impact.”
~ Marije @vialuce

Always a pleasure to see the Magic Wand in action and the @CrashPadSeries highlights each person’s own preference for use. #SexEdPornReviews

The Behind the Scenes video also got love!

The behind the scenes for #Ep217 starts with an interesting insight into the positioning of cameras & how a scene starts. #SexEdPornReviews

“The behind the scenes vid gave some fascinating insight into the mainstream industry vs filmmaking with Crash Pad. The balance of genuine enjoyment and discipline as a performer is explored well here – which is a particular interest of mine. Great work, it is so important to know that the people who help us to get off are enjoying their jobs.”
~ Jenny Guérin @writtenbyjenny

Let’s hear the performers speak for themselves:

The photos from this scene perfectly capture how much I love @NikkiHeartsx Thank you @CrashPadSeries pic.twitter.com/M8cI5nthCp

Thank you Nikki and Leigh, and thanks to our panel of sexual health educators and sex bloggers for watching. What did you think of the episode? (Leave your comments below.) Want to see watch for yourself? Watch here!